Daily Kos—which you may consider to be a leftwing political site—would like you to know that Sanders and his team aimed at a grievance politics that would consolidate thirty percent of the Democratic electorate.

And they bloody well nailed it.

Unfortunately for them, the other 70 percent are consolidating against them.

As the Very, Very Reverend Franklin Graham calls down the wrath of God on the Democrats, we have it on good authority that President Pence is looking better and better out in Sioux City, Iowa.

May it be so. World without end. Amen.

Meanwhile, Trump, calling on some primal resource deep within his lizard brain, has intuited that if his alternate reality begins to slip from the minds of his cult followers, he is royally screwed, blued, and tattooed. Hence the NOTHING WAS DONE WRONG! tweet.

As I reported earlier today, the Wall Street Journal has gently hinted to its plutocratic readers that this may not be the world’s best idea—for the said plutocratic leaders and for the empty suited politicians who represent them.

But Trump, it is said, has a mystical connection with the minds of the uneducated white folk of the heartland. So I think I’m goin’ with The Donald on this one: yep, let the alternative reality fade from their simple minds, and it’s all over for the Trumpeter.

I don’t know whether that’s right. But hallelujah, may it be so. World without end. Amen.

I want to share Daily Kos’ take on the matter. You will learn nothing new from it. But it is  the cocktail hour right now, out on the Right Coast.

The idiot in chief was at it again, on Sunday, this time apparently responding to Republicans who have been attempting to both-sides their way through impeachment questions by muttering, to the press, that Donald Trump was wrong to extort Ukraine into opening “investigations” of his political foes but that it wasn’t so bad as to amount to an impeachable offense.

That was never, ever going to fly with Donald Trump, because Donald Trump is a (say it with me, now) malignant narcissist. He is mentally ill. He genuinely believes he is perfect, his actions are perfect, he is the bestest phone-talker in the history of phone talking and he will get VERY DAMN MAD AT YOU if you suggest otherwise.

Republican lawmakers may think their best path for dodging responsibility to an exposed high crime, of the explicitly mentioned-in-the-Constitution variety, is to very lightly rap Trump on the shoulders while declaring that well, the Constitutional edict against doing crimes is more of a suggestion, really, but Trump has no intention of allowing that to happen. One does not criticize Dear Leader by suggesting that he has done something wrong. One praises Dear Leader for his perfection, and if you can’t handle that, Trump’s tone suggests, you may end up on Dear Leader’s enemies list no matter how you vote on impeachment itself.

That puts Republicans, especially Senate Republicans, in a bind. Anyone who does not want to look like a frothing authoritarian-minded nut (sit down, Lindsey) has to acknowledge that no, it is not “perfect” to withhold military aid from an ally as means of pressuring them into supporting an election-related conspiracy theory that your personal “lawyer” friend cooked up to smear your next possible election opponent.

From that uncontroversial real-world perch, Republican senators think perhaps they can rappel down briefly to crackpot crazytown base-land with declarations that it is still not quite corrupt enough to actually do anything about. Spilled milk and all; oh well, chalk this one up to Trump just not knowing which crimes are crimes.

That would allow them to avoid collapsing entirely into the Dear Leaderism of the Jim Jordans and Devin Nuneses, so that they themselves do not look mind-bogglingly corrupt, while still avoiding all-but-certain primary challenges from Republicans who dothink Dear Leader ought to be able to commit any damn crime he wants to. It’s what Senate Majority Leader Mitch McConnell, perhaps, intends as the Senate’s escape hatch now that a dozen different witnesses have testified that Trump and allies without question carried out the extortion effort, over the course of many months; the previous Republican stance that Trump did nothing wrong is now impossible to plausibly argue, so arguing that Trump’s corrupt act was not a presidential dealbreaker is the current line of retreat.

But Trump isn’t having it. Dear Leader is perfect, by God, and not one of you will be getting out of this by meekly claiming otherwise.

I think it’s time for a drink. Not only to accompany the wit and wisdom of Daily Kos, but also because my Russian readership is steadily growing, and I’m a little concerned.

I don’t know how the election will go next week, so I will wait until the votes are counted to offer a purported explanation. But there are a few other things that I do know.

The Luxury of Trauma

It’s amusing that Politico solemnly informs us today that Democrats traumatized by 2016 are having pre-midterms nightmares. I suppose that is probably true of many. But this I know: when you are in the fight of your life, you cannot afford to be traumatized.

Meanwhile, Ross Douthat is, I think, on much sounder ground in lamenting The Luck of the Democrats: Trump could have flattened liberalism. Instead he’s given it an opening.

I deplore Douthat’s desiderata but believe he is probably right, or almost right, in his analysis of some plausible counterfactuals. But something important needs to be added to Douthat’s analysis this morning. Remember how, in his dubious book, Michael Wolff told us how Trump didn’t want to be elected president? If you bear that in mind, the best explanation for the Trump behavior that Douthat finds inexplicable is that Trump does not actually want to lead a governing coalition.

And so here’s another thing I know. I know that when your adversary seems to be crazy, there are three and only three explanations: (1) Your adversary is actually crazy. Or, (2) your adversary has figured out something that you haven’t figured out, and isn’t crazy at all. But don’t forget the third possibility: (3) your adversary seems to be crazy because he isn’t actually pursuing the goal he tells you he is pursuing, or the goal you would expect someone in his position to be pursuing. So, given his real goal, not his presumed or expected goal, he actions are appropriately attuned to his end.

Finally, on an optimistic note, this Daily Kos headline: Midterms 2018: Women are ready to win the fight.

So I know something that Trump does not know: watch out for the women. 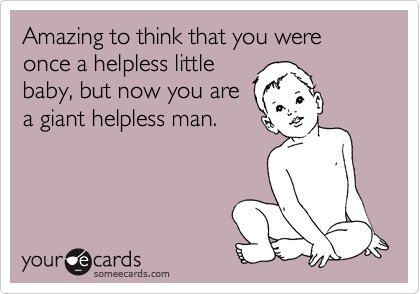 A propos President Trumplethinskin’s decision to stay away from the correspondents’ dinner for fear of being roasted, Hunter of Daily Kos writes,

Donald Trump has been in office a month, and it’s been clear since the first weekend that he’s mentally not fit to do the job. His narcissistic obsession with battling those that would say even the slightest word against him consists the near-entirety of his day job, as he whines about leaks from his own administration, and the horror of reporters reporting on the leaks coming from his administration, and the double-horror of reporters reporting that despite what ol’ snuffleface has been yelling there are indeed multiple investigations into the actions of Trump’s campaign team vis-a-vis that whole Russia tampering with our elections business.

The man who launched his political career claiming that the then-current president was not even a real American has been completely crippled with rage that, after gaining the same office, people are saying nasty things about him. He was unprepared for Saturday Night Live to make fun of him. He was flummoxed by reporters wanting to ask him questions about things other than his own greatness. He was sent into spasms of tiny-fingered rage over someone, somewhere in Washington, not agreeing with his latest baffling pronouncements.

And now the whole of the White House appears to be engaged in one long round of babysitting the manchild through each one of his tantrums. If it means bashing the notion of a free press, they’ll do it. If it means lying to the public about things that are trivially disproven fifteen minutes later, they’ll do it. Don’t ask the manchild’s administration hard questions, American reporters, or by gum maybe we just won’t have press briefings at all anymore, you meanies.

All in an effort to protect Donald Freaking Trump from having hurt fee-fees. Good God, what a pathetic little child. Scratch that—it’s the whole White House. There’s apparently not a single inch of backbone to be found in the manchild’s entire team. Forget reporters, we need to send in a team of top scientists to study this new species of somewhat-sentient snowflakes!