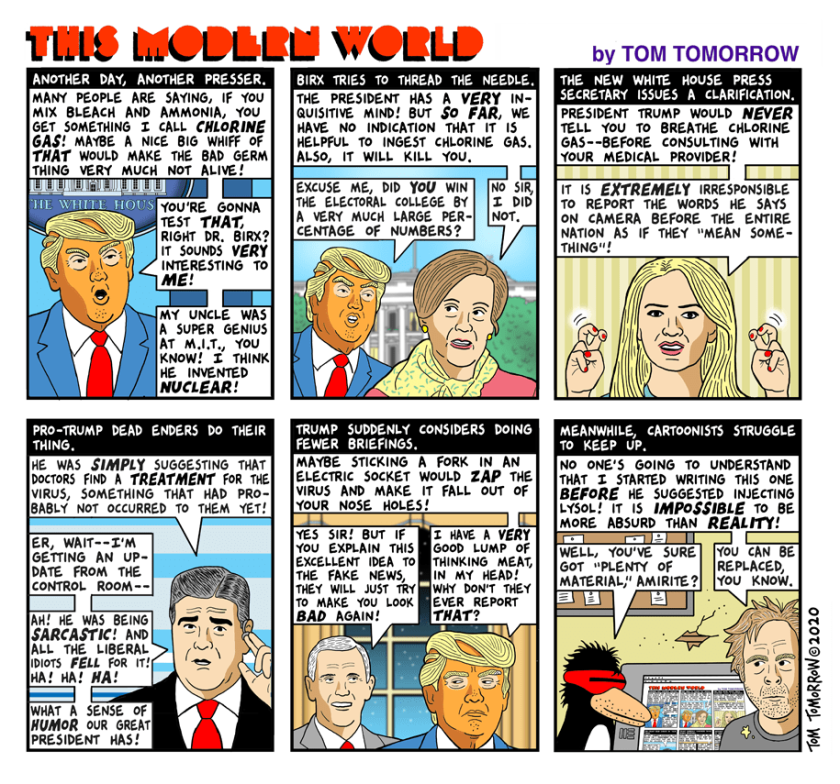 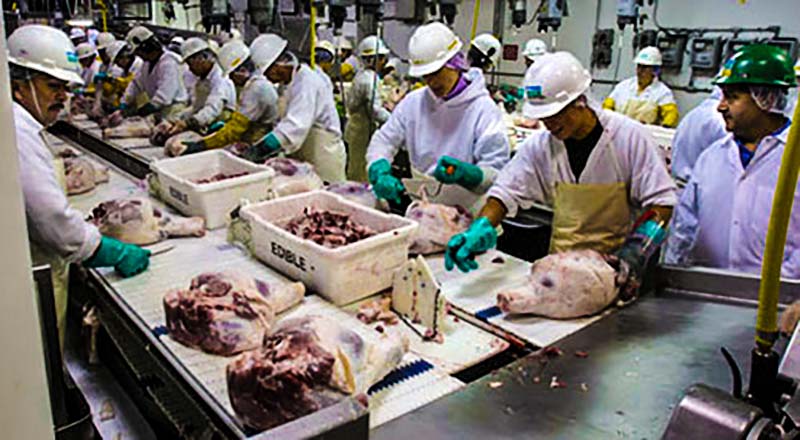 Daniel McGraw takes a deep dive into The Problem with the Rush to Reopen: Trump says some states can end their shutdowns “literally tomorrow.” But those states have not yet shown a clear downward trajectory in new COVID-19 cases.

McGraw points out, in considerable detail, that Orange Man wants to begin reopening the red states and the swing states, but the data on the virus’s progression in those states would not allow reopening, under the guidelines he announced a few days ago.

A friend has shared this unedited transcript of a part of the Daily Gaslighting.

This is supposed to reassure us—and make us more disposed to reelect Orange Man?

I don’t think so.

The reporter’s question arises from the fact that meatpacking plants across the country have become hot spots, and the nation’s food supply system is in peril. The transcript reads:

TRUMP: “Well, you’re asking that because of what happened — it’s a fair question, too — what happened in Denver. Because in Denver, I’ve never seen — I said, “What’s going on?” We’re looking at this graph where everything’s looking beautiful and it’s coming down and then you got this one spike. It’s — I said, “What happened to Denver?”

And many people, very quickly, and they — by the way, they were on it like, so fast, you wouldn’t believe it. They knew every aspect. They had people go and — not only testing, “Who did you see? Where were you? How many people did you meet? Were you out to dinner in somebody else’s home? Where were you?” Where did — where did this number of people come from? How did — they are totally on it.

Now, this just happened. I just saw it this morning. I’m looking at everything smooth, going down, topping out. And then you have this one spike in Denver. It’s like, where did this come from?

So we’ll be looking at that. And we don’t want cases like that happening. This was — but this — this is the kind of thing can happen. This is very complex.

This is a very brilliant enemy. You know, it’s a brilliant enemy. They develop drugs like the antibiotics. You see it. Antibiotics used to solve every problem. Now one of the biggest problems the world has is the germ has gotten so brilliant that the antibiotic can’t keep up with it. And they’re constantly trying to come up with a new — people go to a hospital and they catch — they go for a heart operation — that’s no problem, but they end up dying from — from problems. You know the problems I’m talking about. There’s a whole genius to it.

But, you know, I think we’re doing well, and they’re on Denver like you wouldn’t believe. I came in this morning; it was a flurry. I said what’s going on? They said, “Denver.” I said, “What happened to Denver?” Because Denver was doing pretty well. And they’ve got that under control. But, yeah, that would be a case where you do some very big testing.”