If you would like to enjoy an extensive and detailed thumbsucker on the Daily Gaslighting Show, do please check out the Washington Post, 3 hours of Trump: The president fills briefings with attacks and boasts, but little empathy.

Bleachgate feels like the day Trump jumped the shark, n’est-ce pas? Though I do understand that my feelings plus 55 cents will buy you a first-class postage stamp.

The press is full of talk about Republican pols and operatives, generally speaking anonymously, who are scared to death about November. And talk about unidentified White House aides who are terrified that Trump will resume his Daily Gaslighting—even though he said on Friday that he planned to take his marbles and go home.

… do the views of White House aides, and the views of Republican office-holders and operatives, matter very much?

I shall answer my own question. No, ladies and germs, the views of this type of person are utterly unimportant. What matters are

Meanwhile, out in Cultland, this rhetorical question arises:

Can’t Y’all Just Agree on Which Lie Y’all Are Going to Tell? 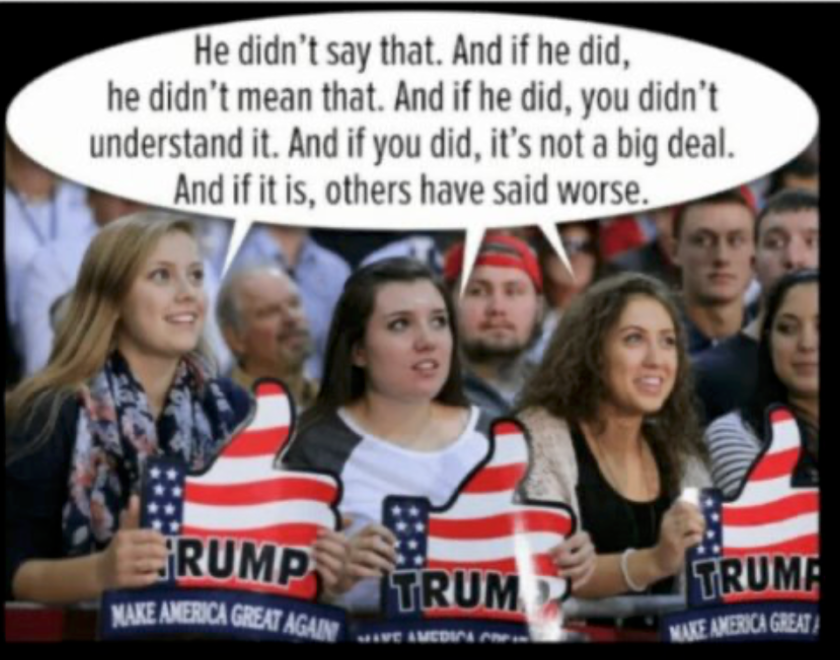 One of my high school classmates—turned, in her old age, into local High Priestess of the Cult of Trump—has played some word games with Bleachgate. “Disinfectants,” she has argued, could have a very broad meaning—and some of the substances within that very broad meaning are appropriately injected or ingested into the body.

Others have argued, without context, that Trump’s words were “taken out of context.” Back in New York, we used to use that trick all the time, when our client was proven to have said some things that evidenced criminal intent. How else could you defend the indefensible? You couldn’t. You just had to keep on repeating “taken out of context,” like a parrot, and manfully refuse to say what context would rebut the criminal intent.

I am reminded of those times in my legal practice when I was sorely tempted to say to my clients, “Hey, if you’re going to try to lie your way out of this mess, couldn’t you all get together and agree on which lie you’re going to tell? And can you please make it a lie that an eight-year old of middling intelligence might possibly believe?”