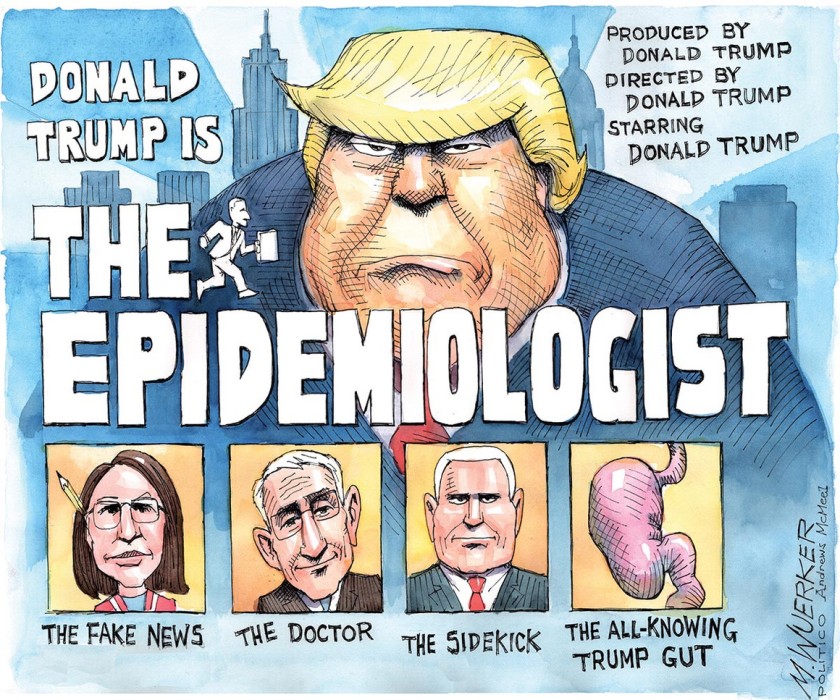 Emily Badger and Kevin Quealy, Red vs. Blue on Coronavirus Concern: The Gap Is Still Big but Closing

Charles Warzel, Trump Chooses Disaster as His Re-Election Strategy: It’s a massive bet that political polarization is a more powerful force than the virus’s body count.

All the data in the last few days show that the Trump Bump in popularity is continuing. A number of generally reliable pundits have given a pollyannish spin on this development, and I hope they are right. My own view is that you can fool some of the people some of the time, and that Trump’s nightly coronavirus shit shows are currently fooling a few more people a little more of the time.

The question is what happens going forward. How many bodies will pile up, and where, and how will the Trump Base respond to his abdication of leadership? After all, they fell for Trump’s con and thought they were electing a strong leader. What they actually got was an authoritarian weakman.

Andrew Sullivan sees Trump’s behavior in this crisis as flowing directly from his mental deficiencies. Think of it this way. I barely passed elementary calculus. If you, nonetheless, insist that I plan the trajectory of your next missile launch, then you should bloody well not be surprised if the missile lands in the wrong place.

By contrast to Sullivan, Warzel presents Trump’s dastardly behavior during the crisis as a choice. But, I suppose that, in the end, it doesn’t matter whether Trump’s malfeasance results from irresistible impulse or from conscious choice. What matters is how his base reacts, as the bodies pile up and as the churches don’t reopen for Easter services.

So let me say three things about that. First of all, we don’t know the answer. Second, the material laid out in the Badger/Quealy piece is very informative, and generally hopeful.

Third, I rely not only on data and analysis but also on what my own gut tells me. I grew up among people who were racists then, who are still racists now, and who are Trump supporters. They have those characteristics in common, but there are lots of differences too. There are white trash bully boys, there are mild-mannered store clerks, and there are professors and doctors and nurses and lawyers.

And so, on the day when Trump fires Dr. Fauci, what are these people going to say, and what are they going to do?