The Zealots All Het Up 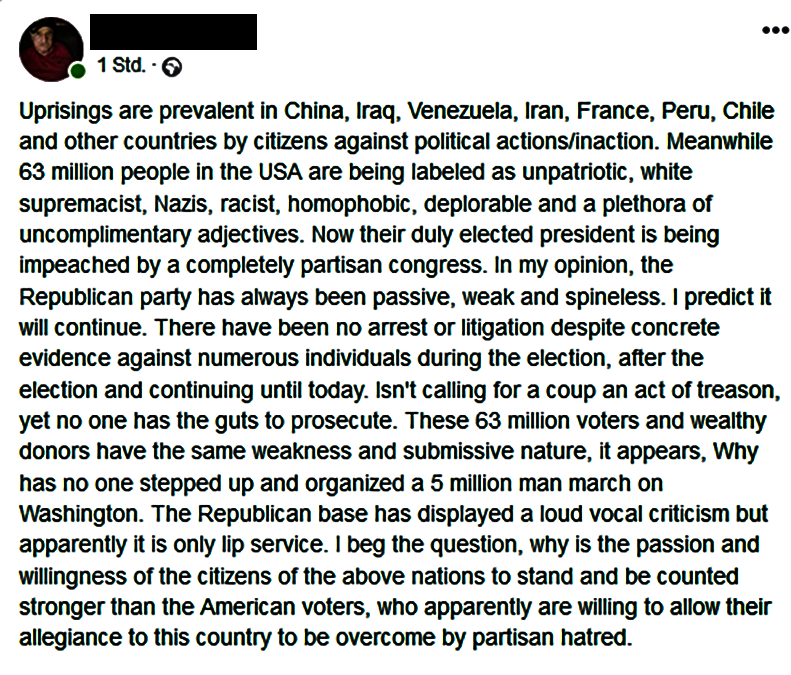 The above post is from one of my high school classmates. I have blacked out his or her name, to avoid unnecessary embarrassment for the family.

Meanwhile, on the other side of the fence, the usually reliable Greg Sargent has suggested that we should start calling all Republicans criminals.

Someone evidently forgot to take his medications this morning.

Writing in Vanity Fair, Ken Stern informs us “IT IS HARD TO READ THIS AS ANYTHING BUT A WARNING”: NEW POLLING SUGGESTS DEMOCRATS’ IMPEACHMENT PUSH COULD ALIENATE KEY VOTERS: Data exclusive to Vanity Fair shows impeachment could be a losing issue for Democrats hoping to recruit Independents in 2020.

I gritted my teeth, read the article, and found it maybe a soupçon less disheartening than the title might suggest. But it was still plenty bad. It’s not so much that the independents believe or admire Trump. It’s that they are confused and exhausted.

And, most of all, they don’t see Trump’s continuation in office as relevant to their own wellbeing or lack of same. As long as things are OK for them personally, they don’t give a rat’s ass whether the President has the maturity of a three-year old, the morality of a sea slug, and the temperament of a rabid rottweiler.

One could bloviate about the immorality of this attitude. In my eighth decade of life, I for one don’t do nearly as much moralizing as I did in my youth. But it’s still surprising that large numbers of folks don’t see the danger in being led by a childish, narcissistic, immoral fool. Sort of like living your life unaware that hot stoves burn fingers or that three year olds are not supposed to drive cars.

But It Gets Yet More Bizarre

In my next post I shall reveal what I find most surprising of all in this bizarre world.