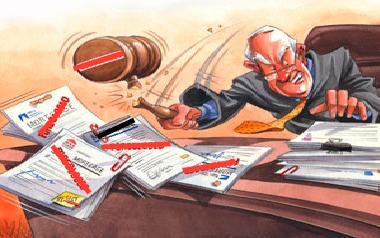 The Return of the Aardvarks

Dr. Aardvark and I have returned from vacation. It was a nice vacation, but we have reached a certain age, and now we need to rest up from our vacation.

A fairly lengthy thumb-sucker in the Washington Post—Trump defies close advisers in deciding to threaten Mexico with disruptive tariffs—elaborates on how a (seemingly) mad emperor Trump is (seemingly) about to wreck the economy, despite strong pushback from his closest advisors. He may back down, or he may not. But, as a talking head remarked yesterday, the market is beginning to think he may be crazy after all. The Dow was down 355 points (1.4 percent) yesterday.

A week or two more of this bullshit, and President Pence will be looking better and better.

Meanwhile, you might recall that I told the garment-renders, concerned that the courts might slow walk refereeing presidential stonewalling versus congressional oversight, the courts have wide discretion over their own schedules, and can act with dispatch when they see the need.

In the case of Donald Trump et al. v. Deutche Bank and the House of Representatives et al., the Second Circuit—that’s the federal court of appeals in New York—has just ordered briefs to be filed on June 18, July 11, and July 18. It’s likely we’ll know the result by the end of July.

Meanwhile,  down in the federal courts in Washington, D.C., where Trump sued his accounts to try to keep them from responding to a congressional subpoena, the court of appeals will hear that case on an expedited basis, also.

Will They Think They Have to Destroy the Constitution in Order to Save It?

It’s likely—didn’t say it’s a lead pipe cinch, but it’s likely—that Trump will lose in the courts of appeals. That will tee up the case for Supreme Court action, or inaction, as the case may be.

Likewise, it bears noting that the Federalist Society is funded by plutocrats like the Koch brothers, and plutocratic interest groups such as the United States Chamber of Commerce. I think it may be assumed, with considerable confidence, that these folks will not be happy to see Trump do the Samson-in-the-Temple routine and bring the economy crashing down around their heads.

Soo … will the Supreme Court majority vote to do away with congressional oversight, thus destroying the Constitution in order to save it (by keeping the presidency in Federalist Society-friendly hands)? I don’t think so.

And here’s the icing on the cake. Guess who was the keynote speaker at the May, 2019, convention.

Why, that would none other than Mike Pence.

If Pence were to replace Trump, the presidency would still be in very, very Federalist Society-friendly hands.