Maureen Dowd was at the Grand Rapids rally. I wasn’t, so I’ll have to depend on her. Of the last hour of the rally, she writes,

For the last hour of the speech, Trump went flat, simply resorting to golden oldies. (He had already managed to step on his own parade in the dumbest way possible against the recommendation of his top people and Kevin McCarthy when he jumped back into the quicksand of health care.)

It’s not clear why, on a night when his aides promised high energy, he seemed to lose altitude. Did he miss having Mueller as a foil? Did he know in his heart that he was guilty of some of those sins? Is he tired of rallies even before the 2020 race gets well underway? Does he know that his “No Collusion” headline will not change the minds of all those Americans who disdain him? Or is he being a sore winner again?

Maybe Trump, like America, is just tired of winning.

The full [Mueller report] may require revised judgments from some of Trump’s critics … Perhaps the president is not a foreign agent or a criminal mastermind. Perhaps he is a weak leader who surrounds himself with clowns and criminals. Perhaps his lack of character attracts and enables other corrupt men. Perhaps he is more pathetic than dictatorial, more fool than knave. Perhaps behind the compulsive, simplistic, narcissistic exterior, there is a compulsive, simplistic, narcissistic interior. Perhaps he has moved beyond good and evil …

And perhaps Trump’s psyche doesn’t matter. Perhaps what matters are the psyches of those who support him.

Have they, too, moved beyond good and evil? 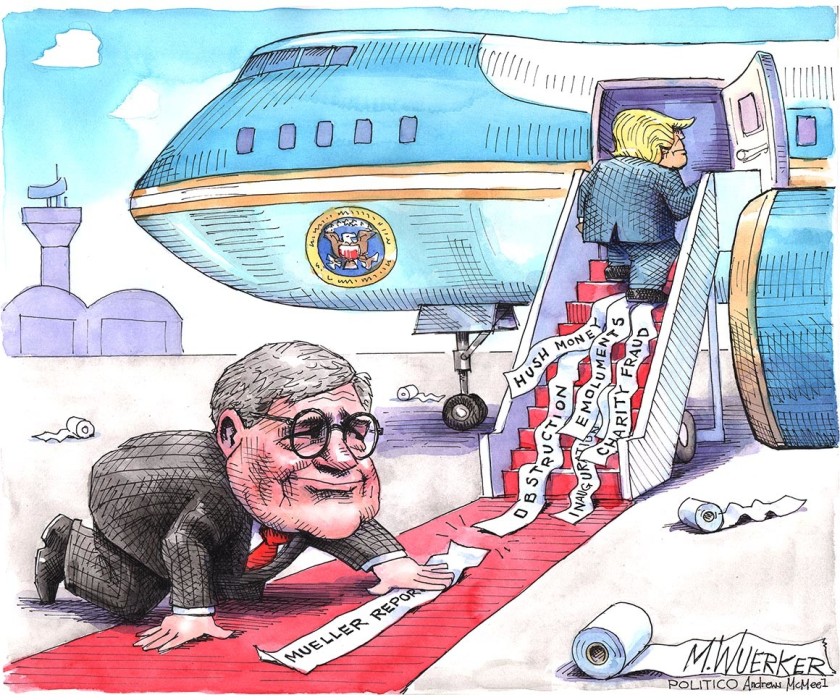 Plainly, William Barr lobbied to become attorney general for the second time in his career. I can think of four at-least-barely-plausible hypotheses about why Barr might have sought his current position:

When he became attorney general, Barr was at the end of a long, prestigious, and highly lucrative career. He had no need to enhance his resume. His personal ambition had long since been satisfied. Hypothesis one is barely plausible but highly unlikely.

In the wake of the four-page Mueller report “summary,” many are leaping to hypothesis two. They may be right.

That disposes of hypothesis two. We are left to choose between three and four.

By the application of logic to the known facts, I’m still going with four.

In fact, I think it’s entirely possible that Barr wrote the four-page “summary” in a way that was intended to bring on a Trump “vindication” overreach that will backfire when the Mueller report is released.

Barr made a great deal of money in his career. And, to make that money, he did a whole heap ‘o Machiavellian thinking.

I hope none of you are hand wringers or bed wetters. But if any of you are excessively concerned about the Trump “victory lap,” please take note of this: Trump’s Popularity Unchanged After Completion of Mueller Probe: President got no bounce with voters after attorney general said he was cleared of collusion.

The pollsters’ summary reads in part,

A new Morning Consult/Politico survey conducted after Attorney General William Barr released his summary of Mueller’s findings shows a negligible immediate effect on how the public views the president.

The March 25-26 survey found 42 percent of voters approve of the president and 55 percent disapprove – a net approval rating 13 percentage points underwater and virtually identical to the poll conducted the week before.’

Regardless of whether voters correctly identified Mueller’s conclusion on whether the president committed obstruction of justice, the determination itself did little to move public opinion: Forty-seven percent of registered voters said they believed Trump tried to impede or obstruct the investigation, compared with 44 percent who said the same in a February poll.

Similarly, most voters (52 percent) still believe it is likely that Russia has compromising information on Trump, compared with 51 percent last month.