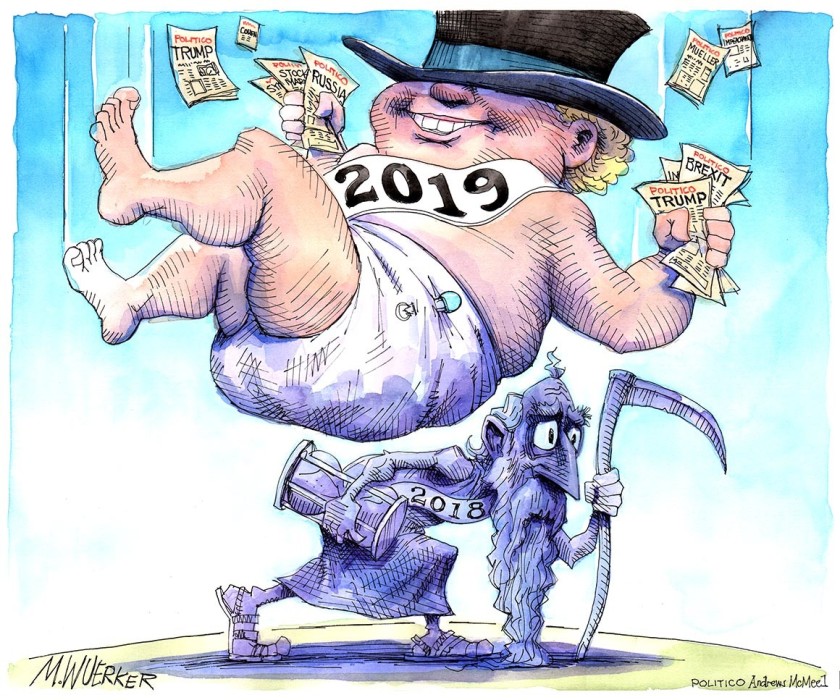 It’s going to be one pistol of a year.

Customarily, much alcohol is consumed this evening. To help everyone get into the right spirit, Hans, who lives across the sea, in a place where it is already 2019, has shared The Philosopher’s Song.

I’ll drink to that. 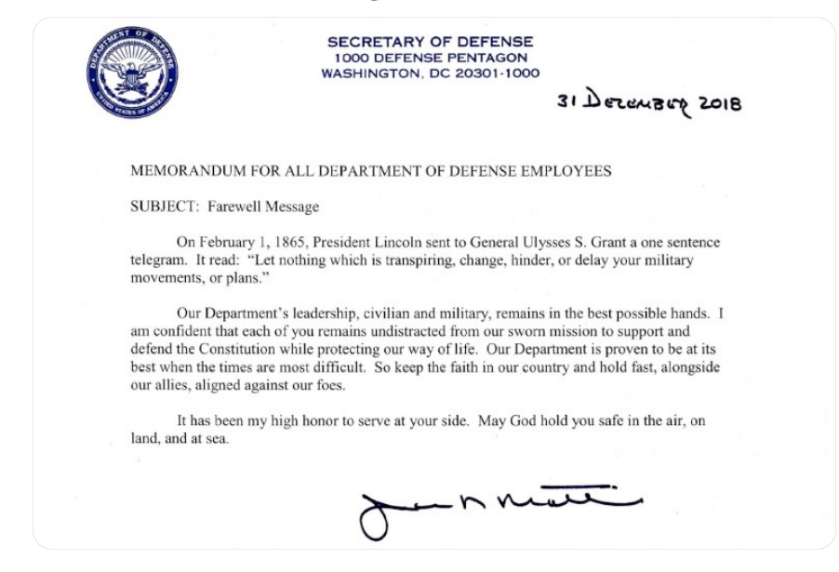 The Lincoln quote in the first sentence made my eyebrows lift. I thought the historical context might help to explain what Lincoln was talking about—and why Mattis thought the quotation apropos in the present circumstances.

The context, apparently, was that Confederate negotiators were in Washington trying to negotiate an end to the war. Lincoln was instructing Grant not to let the existence of those negotiations affect his military plans.

I assume Mattis is telling the troops not to let Trump’s dealings with our current enemies cause our troops to drop their guard.

After dining with Trump, Lindsay Graham explained that “The wall has become a metaphor for border security.”

Meanwhile, outgoing chief of staff John Kelly “conceded the point to the Los Angeles Times in an interview published Sunday: ‘To be honest, it’s not a wall.’ The White House abandoned the concept of a ‘solid concrete wall early on in the administration,’ he said.”

Where are the clowns?

Quick, send in the clowns.

OR, WHY PROGRESSIVES SHOULD NOT PANIC AT THE PROSPECT OF PREMATURE IMPEACHMENT

On the Friday PBS Evening News, Gerson and Capehart replaced Brooks and Shields. Gerson raised the possibility of an impeachment effort based on evidence that all Democrats would support and all Republicans would oppose—and pretty much had a caniption fit over the prospect. I feared for his health.

I hear much the same thing from some of my friends.

Well, I write this post to convey some bad news and some good news.

The good news, I wish to argue, is that Nancy Pelosi will not unleash impeachment in the House unless and until the time becomes ripe.

Let us reflect on what will happen in the meantime.

Trump has created a crisis without the slightest notion about how to exit. Mitch McConnell has given up on him. Trump’s solution to every problem is to throw bullshit at it. This crisis cannot be ended by throwing bullshit. I don’t know how the shutdown showdown will end, but I’m pretty sure it won’t end with something that will allow Trump plausibly to claim victory.

As our troops withdraw, I assume we will be treated to the televised massacre of our Kurdish allies.

With the U.S. defense and foreign policy apparatus in disarray, this would be an excellent time for enemies to make moves adverse to our interests. One has to assume they will probably do that very thing.

Meanwhile, we do have a prospective Attorney General. And what a hoot those confirmation hearings will be.

It’s coming soon. And it’s going to be made public, one way or the other, as sure as God made little green apples.

Indictments and Threats of Indictment

Trump has made his career as a professional white collar criminal.

Lots of investigations. Lots of bad headlines for Trump. Day after day after day.

No Effective Assistance of Counsel

Trump badly needs a large team of the most competent and aggressive counsel in the land. Instead, he has a few clowns. And that will not change, because he is an uncontrollable, disastrous client. Anyone who represents him is soon going to be in need of his own lawyer. And the folks who best understand that problem are the very people Trump would need for his defense.

Not exactly popular with the country club set.

Every week it gets worse. Probably, at this point, there is early dementia, on top of everything else.

It’s hazardous to predict how low the Republican toadies in Congress will go: their cowardice has exceeded our expectations on just about every occasion.

But there is actual data on public support. In the 2016 popular vote, Clinton beat Trump by 2.1 percent. At last count, in the 2018 midterm elections for the House of Representatives, Democrats beat Republicans by 8.6 percent.

As of this morning, the average of polls of “all adults” shows Trump opposers outnumbering Trump supporters by 12.2 percent. For all polls attempting to measure the views of “likely or registered voters,” the corresponding difference is 10.5 percent.

It’s like watching a glacier melt. It takes a long time for the process to finish. But in the meantime, it’s a hell of a show, as the big chucks break off, one after the other, and come crashing into the sea.

Lastly, there is the question of what Rush Limbaugh and Fox News will do. They make their money by cultivating stupidity, but that does not mean that they, themselves, are stupid. I don’t know how they will react to all of the above, so I make no prediction. But logic tells me there will come a time when they have a choice between continuing to support Trump or jumping off the sinking ship. Logic tells me they will jump.

No, ladies and germs, there will be no premature impeachment. Nancy Pelosi will just let nature take its course.

This holiday weekend, you have many things to worry about, but premature impeachment is not one of them. So please enjoy the Rose Bowl parade. Dr. Aardvark and I will be watching along with you.

Matthew Yglesias makes an interesting, and possibly valid, point. It is captured in the headline and subheading: The shutdown is intractable because Trump’s wall is ridiculous and Republicans know it: Conservatives won’t trade the wall for anything good because they know it’s a bad idea.

But, of course, these folks who “know” the wall is a bad idea are not the same as the 25 percent or so of American adults who have joined the Cult of Trump.

Over at Politico, they’re treating the Trump border shutdown tweets, discussed in my last post,  as unserious venting. A cooped-up Trump’s threats fail to break budget deadlock: The president is consumed by the shutdown, according to people close to him, and has been throwing out escalating Twitter ultimatums — to no avail.

But we all know her is taking concrete steps to blow up our international military alliances.

And you might ask the Syrian Kurds whether it’s a good idea to bet your life on the hope  that Trump doesn’t mean the crazy things he says. 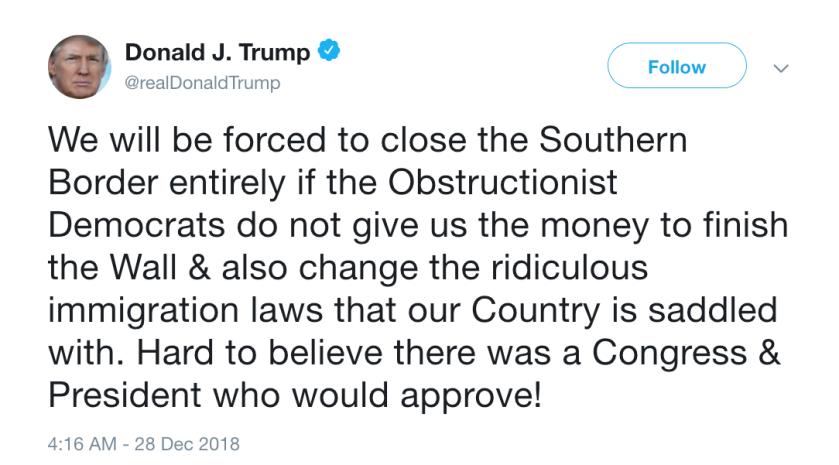 Trump has painted himself into a corner on the government shutdown. Pundits are bloviating on how he might conceivably cut his losses and extricate himself. (See, for example, How does Trump escape the trap he laid for himself?) But the above tweets tend to confirm my biased view that he won’t work out a deal with Congress, but will instead do the Samson-in-the-Philistine-temple routine.

The Hill sums up the damage this would do:

The U.S runs a trade deficit with Mexico, but outside observers have said that closing the border could cause economic chaos given the amount of trade and people who legally cross the border every day.

Nearly a half million people enter the US. each day at various entry points on the southern border, according to a Wilson Center report cited by CBS.

Duncan Wood, director of the Wilson Center’s Mexico Institute, told CBS MoneyWatch that shutting down the border would cost “hundreds of millions of dollars a day” or “maybe a billion.”

But prudence demands that you proceed on the working hypothesis that the person making the threat may well actually carry it out.